Just how far to the extreme right is Catholic University of America? Charles Koch likes it a lot, giving $1 million to business school 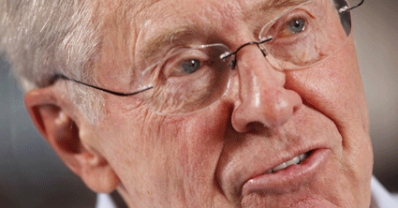 Our own Judge Judith Hayes of San Diego Superior Court is a graduate of Catholic University of American in Washington DC, as is the infamous retired judge Sharon Armstrong of Seattle.

Last month, the Charles Koch Foundation pledged to donate $1 million to the new business school at Catholic University of America in DC to contribute to its effort to advance the study of "principled entrepreneurship." Now some of the school's staff and other scholars at other Catholic universities around the country are crying foul. They're asking Catholic University to reject the donation because the Koch foundation and its funder have long pursued a conservative political agenda that's at odds with Catholic social teaching, especially as recently emphasized by the new Pope. In a letter to school's leadership delivered on Monday, they write that accepting the contribution may "send a confusing message to Catholic students and other faithful Catholics that the Koch brothers' anti-government, Tea Party ideology has the blessing of a university sanctioned by Catholic bishops."

Indeed, Catholic University is not just any Catholic school. It was created by US bishops and they sit on its board. Meanwhile, the Charles Koch Foundation is funded by the chairman and CEO of Koch Industries, the oil and gas conglomerate, and one half of the Koch brothers political duo. The Kochs (who aren't Catholic) have spent tens of millions of dollars over the past four decades pushing a free-market agenda that has included opposing the minimum wage and a host of environmental regulations.

Between 2007 and 2011, Koch-related foundations donated more than $30 million to 221 colleges and universities in the US. Charles Koch's donations to academic institutions have been controversial in the past. In 2011, his foundation sparked a minor controversy in Florida when it pledged $1.5 million to fund teaching positions in Florida State University's economics department. The donation enabled the foundation to have a say in hiring decisions for a new program promoting "political economy and free enterprise"; the foundation also wanted the school to start a new class on "Market Ethics: The Vices, Virtues, and Values of Capitalism," in which books by libertarian icon Ayn Rand would have been required reading.

The academics write that "as Catholic bishops affirm the rights of workers to collectively bargain and organize, the Koch brothers give generously to elected leaders like Gov. Scott Walker of Wisconsin who strip public employee unions of their rights to bargain." And the they quote a pastoral letter from the bishops that states emphatically that the church "fully supports the rights of workers to form unions and other associations to secure their rights to fair wages and working conditions… No one may deny the right to organize without attacking human dignity itself." (Koch Industries did not respond to a request for comment. We will update the post if they do.)

The scholars also knock the Kochs for fighting the expansion of Medicaid in many states through their advocacy group Americans for Prosperity, another position that puts the brothers at odds with Catholic social teaching. (The church supports the expansion.) To make their case, Catholic University faculty and others who signed on to the letter are invoking "Time Man of the Year" Pope Francis. "While the Koch brothers lobby for sweeping deregulation of industries and markets," they write, "Pope Francis has criticized trickle-down economic theories, and insists on the need for stronger oversight of global financial markets to protect workers from what he calls 'the dictatorship of an economy which is faceless and lacking any truly humane goal.'"

The letter-signers aren't the only ones who are unhappy about Catholic University's decision to take Koch money. Faithful America, a progressive Christian group, launched a petition last month urging the university to reject the donation. So far, more than 28,000 people have signed it. "The Koch brothers bankroll a political movement that is working to undermine much of what the Catholic social tradition has stood for over the past century," said John Gehring, Catholic program director at Faith in Public Life, an advocacy group in Washington. "It's reasonable to ask why a business school at a Catholic university would want to even risk giving the impression that it endorses a libertarian view of economics. The faith in unfettered markets and anti-government zealotry that has become a theology for many on the right is simply incompatible with Catholic identity."

The bishops who sit on Catholic University's board have increasingly moved away from the church's focus on social justice and aligned with more conservative political elements. The US Conference of Catholic Bishops has pulled back funding for anti-poverty groups that have been caught working in coalitions that included gay-rights advocates, for instance, and it's cracked down on nuns who supported President Obama's health care reform initiative. Catholic University would never take a donation from Planned Parenthood or a foundation that promoted abortion rights, but it doesn't see a problem with taking Koch money.

The university issued a statement defending the donation and accusing Faith in Public Life, which helped coordinate the letter campaign, of an "unfortunate effort to manufacture controversy and score political points at the expense of The Catholic University of America." The school says the Koch foundation will have no role in hiring or course material, and that "the aim of the Charles Koch Foundation grant—to support research into principled entrepreneurship—is fully consonant with Catholic social teaching." The university says the grant has not inspired any opposition on campus and notes that Koch donations to universities are so widespread and uncontroversial that some of the academic signers of the protest letter seem unaware that their own institutions already take Koch money (including Notre Dame, Villanova, and Holy Cross). To that end, the university declares that it "has no intention of revisiting its decision to accept the grant from the Charles Koch Foundation."
Posted by Maura Larkins at 7:42 PM